For those of you who read and recall my Thursday night recap, it was more than a bit of a late night. As I tumbled into the Hall H line at 4:30 am, coffees in hand for my con wife and line crew, I was running on nothing but pure willpower. The awesomeness of the being in line with thousands of other geeks, quickly cranked my energy level up to 11. That’s when I adopted my new, official San Diego Comic Con slogan, “I’ll sleep when I’m dead.” ™ And I’m going to get shirts made with that slogan on them for next year and pass them out to whatever line clan will have me.

Like this, but with an SDCC logo. And a better font. Having friends who are designers is cool.

What drove me to such madness? “The World’s End”.

The first panel of the day in Hall H was “The World’s End”, the third movie in the “Cornetto Trilogy”. “Shaun of the Dead” was one of the most brilliant comedies of the past 20 years, so every fiber of my being was consumed with getting into Hall H to see Nick Frost, Edgar Wright, and Simon Pegg talk about “The World’s End”. (And if anyone knows Nick Frost, can you pass this on to him? I’m pretty sure this is the first, and only, write up of the panel listing him first. He’s a funny guy who doesn’t get enough credit.) 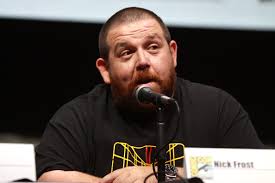 When the schedule came out in the week or so leading up to SDCC, I knew this was my “must-see” panel. If you ever go to SDCC, here’s my advice – pick one “must see”, see it, and be glad with whatever else you stumble across. And, my karma was working overtime when this panel was scheduled.

You see, Hall H and Ballroom 20 at San Diego Comic Con go down like this: if you get in and get a seat, that seat is yours for the day. There’s a sub-segment of Comic Con attendees who are room campers. They get up camp out, often overnight, to get in the room and sit through everything in that room for the entire day. Hall H tends to be all the big movie stuff and Ballroom 20 are the most popular TV events.

As a non-camper, I’m not willing to sit through stuff I don’t care about in order to hit the things I do. To me, it seems like a waste of time. But, hey, it’s your con – whatever floats your boat campers. Good on ya. (Did I do that right, Marty?)

I spelled that out for anyone not versed in the mechanics of Comic Con because it explains two things. First, if “The World’s End” hadn’t been the first panel of the day, there’s no way I was going to get into line at 4:30 am and then sit through other panels to kill the time until these three comic geniuses hit the stage. Two, it freaked everyone out later on when the “World’s End” panel ended and I “made like a tree and got out there”.

Wait. Is that guy behind Biff doing a 10th Doctor cosplay? All roads converge in San Diego, my friends.

You see, the lineup in Hall H that day was packed with both cult favorites and big deal popular stuff that the fanboys (and fangirls) were wild over. After “The World’s End (opening August 23 at a theater near you)” panel ended, the Veronica Mars panel was up next. After that, the “Walking Dead” TV panel hit the stage. Later in the day, both “Game of Thrones” and Marvel movies had their big panels of the Con. The Hall H line was bigger than ever, and little old me was only there to see “The World’s End”.

So, with that background out of the way, on with the recap.

The fact that 99% of the line was made up of campers waiting for “Game of Thrones”, “Walking Dead”, and so on, meant that almost no one in my vicinity had seen “Shaun of the Dead”. And to quote Simon Pegg from the trailer to “The World’s End” (which is embedded at the end of this article and you should totally watch) “WWWHHHHHHAAAAAA?”

Pictured: The inability to comprehend a mass of SDCC attendees who have not seen “Shaun of the Dead”.

Luckily, there were so many other nerdy things to talk about. I’m pretty sure I talked to someone about Green Lantern for a good 30 minutes, several people and I had scintillating conversations about “The Passage” and “The Twelve”. General good times were had for the five hours we stood outside waiting for the room to open up.

We finally got in and I wound up sitting next to a woman with a story only slightly more odd than mine. While I was there for the very specific purpose of seeing “The World’s End” panel and then splitting, she was also there for only one very specific panel and then was splitting. Our stories diverge in this way – I was at the first panel of the day, she was camping out waiting for her panel until (insert time), meaning she was killing a good chunk of her day sitting in panels like “The World’s End” and “Veronica Mars” – two projects she knew nothing about. So, what was she waiting for? “Game of Thrones”? “Thor: The Dark World”? Nope… the “Pitch Black” sequel. Blew me away…

I think this is the movie they were discussing. Not sure…

How was “The World’s End” panel? In a word – fantastic. Seeing Nick, Simon, and Edgar on stage together gave everyone  a great sense on why their movies work. These guys are great friends and have worked together a long time. What a terrific team.

I won’t do the panel then injustice of trying to recap. I’m embedding the video, which is totally worth a watch for fans of this trilogy. One of the new friends to the blog, Rebecca, asks a question to the panel (check 30:38), so hey – now I know someone who has talked to Simon Pegg.

The surprise to me was the moderator, Chris Hardwick. Casual fans of general geekery will probably not know him, but might know of him. Chris has a regular podcast called, “The Nerdist”. That’s about all I knew about him going into SDCC.

Chris was an astonishingly good moderator, holding his own against these comedy legends. In fact, I was so impressed, I started downloading and listening to The Nerdist, and I’d recommend the show to anyone. Amazing the things one stumbles across unexpectedly at SDCC.

So, once the panel wrapped, I got a text from Justin, congratulating me on getting into Hall H. I texted him back telling him that I was bailing out and giving up my seat, to which his actual text reply was, “Nooooooooooo!” But, that’s how the Casual Comics Guy rolls.

The rest of Friday is soon to come. In the meantime, enjoy the trailer to “The World’s End” and the video of the panel.

Trailer for The World’s End. See it.