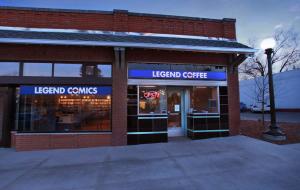 So, yesterday I got to visit a comic shop I’ve heard a lot about, but haven’t been to in quite a while – Legend Comics and Coffee. Located at 5207 Leavenworth St. , Omaha, NE, the store is certainly different than I remember.

As a Casual Comics Guy, here’s my two cents on the shop.

I went to the store over lunch with my co-worker, Marc. We had just finished a business lunch and were on our way back to the office. In true casual comics fan fashion, we decided we had just enough time to “pop in” and grab a couple of titles.

You the saying, “you don’t know what you’ve got until it’s gone” (Regardless of how awkward the grammar is in that phrase)? That was the first thing that struck me when I walked in. There’s no “new release” section on the comics wall. There’s also no “recommended” or “hot” titles. It wasn’t until that moment that I realized how much a casual comics fan needs those things in a comic shop to make a “pop in” worthwhile.

The store is nice, clean, and well-orgaized

So, I wandered the store in a bit of a fog for a moment, as though under the effects of a “Phantasmal Disorientation” spell (for D&D fans) or a stun grenade (for FPS players). The first shelf immediately to my right, which is where I expected new releases to be, was filled with graphic novels.

It’s at this point that I should mention – Legend Comics and Coffee does have a very fine collection of graphic novels and books. I was very impressed by the selection.

Staggering around, clearing the cobwebs from my head, I recalled that Marc and I had discussed a specific title that neither of us had read in years and years – The Fantastic Four. Apparently, on a show Marc watches about comic books (the one with Kevin Smith, I think) someone mentioned the FF as the worst super team in existence.

When I finally regained my mental faculties, I found that the comic shelves were very well organized. Unlike another comic shop in town, the comics were neatly arranged, alphabetically, and I was able to find the Fantastic Four right away. There were titles for “Fantastic Four” and “FF”, but I picked up Fantastic Four, since it had the Thing on the cover. My girls and I are playing Marvel Ultimate Alliance 2, and I’ve been playing Ol’ Blue Eyes, so I figured it was time to catch up on Uncle Benjy.

One nice thing is that they also had about the last half dozen issues of each title shelved with the current issue. Should I get to be more of a “Semi-regular Comics Guy”, that will be nice. It makes it easy to grab the last several issues and catch up.

As I was leaving, though, I ran into another couple of stumbling blocks. It took me insanely long to check out. There was only one customer in line in front of me, and I have no idea what took so long. Not to say that my time is more important than anyone else’s, but when a casual fan is in the store, we are much more likely to drop our purchases and walk out.

Marc and I were both in danger of running late for a meeting and, not really caring too much about the titles in my hand, it would’ve been easy for me to just forget it. Not to say that I deserve special treatment, but comic shops should realize that there are casual fans (over the lunch hour, maybe look for the business clothes) who will abandon their purchases rather than wait. If you’ve got a hardcore fan who will stand for hours and chat about the latest retcon of that Green Lantern guy who is also a planet, that fan might be OK letting someone else who doesn’t want to talk about those tectonic exploits in depth go ahead. 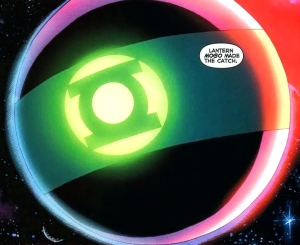 This guy. Whatever his deal is.

Also, as I was ringing up, one of my comics buzzed a couple of times. I think it was called “Prelude to Infinity”. I was thinking that if I got in at the Prelude stage, I might stand a chance of understanding the deal with the whole series months from now.

It turns out that the comic wasn’t technically on sale yet. The big table in the middle of the store that looked like any other display, to the untrained eye, was actually where they were sorting and preparing the comics for new comic release day. Hey – if you need the space, go ahead and use it. It’s just that if no one is working on it, a sign that the comics are not on sale yet would be nice. Not everyone is familiar with the street dates of every title.

Overall, shopping at Legend Comics and Coffee was an OK experience. The store was clean and organized – someplace I could take my kids. It felt like they could use more space, but I know real estate is pricey and comics don’t always carry a huge margin.

The checkout experience was slow, but the staff was nice and helpful when I wanted to find a back issue of Hawkeye. The back issues aren’t visibly shelved, but are in drawers. When I asked for issues 3-5 of Hawkeye, the staffer actually went and found it in the drawers and handed them to me instead of just showing me where to look. That was great. Staffers of Legend, I salute you.

I don’t have a rating system for comics or stores yet. What I can say is that I will definitely stop by Legend sometime if I’m in the area and have more time to try the coffee and food. If I hear of an interesting graphic novel, I feel confident I can find it there. But, it’s a tough place for me to stop on a whim since I feel like I need to know what I’m looking for before I go in.

Posted on July 17, 2013, in Uncategorized. Bookmark the permalink. 3 Comments.