A decade ago, when comic books dominated my life, comics were still predominately “books” – ink on paper. Sure, the paper changed, glossy stock gradually taking over from the old newsprint. In fact, just last week, my girls and I spent a couple of evenings bagging and boarding a couple of hundred comics. They may be the last generation that experiences filing comic books away in longboxes.

On a side note, I forgot how counter-intuitive assembling longboxes is.

This guy has pulled out every hair on his head figuring it out.

I recently read an article over at the AV Club about Matt Fraction’s departure from the FF title. FF piqued my interest when it launched, primarily because of my fondness for Mike Allred’s quirky X-Force series.  The AV Club review compelled me to check out FF #12. (My review on that is forthcoming, suffice it to say that it will be both less informed, but more revealing than the AV Club article.)

When I read the AV Club article, though, I was out of town for business. I was in the metropolis of Nebraska City, NE. And I was there for three days. I’m not complaining. You know what they have there? Apples. Lots and lots of apples.

(OK – I was going to post a video of the Eleventh Doctor hating on apples here. However, YouTube is full of hatred. Hatred and My Little Ponies. Don’t believe me? Try finding Doctor Who and Apples. You might think you’ve got the right scene, but the ponies will get you… Stay away.)

Never. In a million years. Not once did I consider a non-ironic use of apple photos to be a relief.

You know what they don’t have (as far as I can tell)? A comic book shop. Now, I never really ventured outside my hotel or even asked anyone, but I went ahead and assumed that there was no comic book shop there. Should someone find I was wrong, I’d love to know, but until that time I’m sticking to my story. No Comic Book Shop in NE CITY.

So, with not a single, solitary comic book shop in Nebraska City, I grabbed my trusty Google Nexus tablet and searched the app store for way to buy and read FF #12.

And, my friends, this is that tale.

It’s all because Mike Allred rules.

I have found the Google Play store to be a great resource for movies, music, apps, etc. I used to be an Apple guy, but have since changed everything over to Android. But let’s not debate that here. The app store featured a few different comic book apps, but I went ahead with the Marvel application, since I knew the title I wanted was from Marvel.

Downloading and installing the application was as easy as I expected. Logging in was the hard part. I had a log in for the Marvel web site that I must have enrolled in about seven years ago. And, the last time I used it was about six years ago. So, of course I couldn’t remember the username/password combination.

Resetting that password was a pain in the rear from this application. When I tried to log in, the screen simply sat there. There was no indication as to whether it was thinking, rejecting the log in attempt, taking a nap, or anything. When I clicked the “forgot password” link, it took me to an odd page to try and reset the password – which might have been helpful if I could remember the username. Most sites allow you to enter the associated e-mail for a reminder of the username, but no dice.

Eventually, I had to open a browser, go to Marvel.com and fetch my username from there. Kind of a pain…

One nice feature, though. When I logged in to the Marvel app to buy FF #12, it automatically linked to my Google account and let me pay, instantly, without having to re-register payment information

It’s a very nice interface. But I can’t figure out how to get a screencap from my tablet with higher resolution. Sorry, Marvel and Google, my bad. And not yours for giving me an HD screen with an ultra-low res default capture setting.

So, how was the experience of reading a comic on a tablet? I’m glad you asked, imaginary voice in my head. Many readers may have lost interest by now, since most comic fans have probably already had this experience. Thank you for keeping me company.

The application has a “guided” experience that lets you swipe panel by panel, cool transitions and zooms guiding you through the story. It’s kind of neat, but unnecessary in my estimation. Using that interface became too distracting – too much swiping. It was like the “experience” was outpacing the story and art. I actually kind of hated the guided option.

So, I switched back to the regular view. That was just like reading a comic book, but on a screen instead of on paper. It’s hard to get excited about since we’re all used to reading printed materials on a screen now. 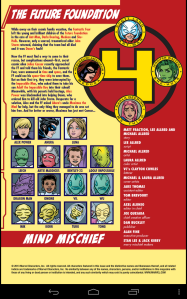 So what does the future of digital hold for the casual comics fan? Not much, really. It’s another way to get a comic book, I guess.

For me, being in Nebraska City was a reason to grab the issue from my app. If I was out of town and absolutely dying to read the next issue in a series, I suppose I would use the digital app to grab it and read it. Otherwise, I’m still waiting to head down to the comic shop and get a few comics. It can wait a few days, and I prefer the social experience of browsing the comic book store.

But the end product is no better or worse than a printed book. It’s probably easier to take a bunch of comics on a trip if you have them on a tablet instead of in your carry-on.

On the other hand, I did take a bunch of back issues of an old 1980s Marvel mini-series on a plane recently and liked taking them out of the bag and board, reading them, and putting them back.

By the way, there’s a super-cool FREE GIFT to anyone who can guess the mini-series I’m talking about.

First to respond with the right answer gets top prize, but any of the first 10 will get something from San Diego Comic Con. Post your comments to the web zone below.

So, to sum up digital comics v. regular comics:

This picture was in an ad in a Marvel comic I bought. I didn’t intend to see it, but I did. And this is a digital “de-hancement” from the original pouch-tacular advertisement.

Would I buy a digital comic again? Sure – if I was dying to read an issue and couldn’t get to the comic book store. Otherwise, I can wait and check it out when I get there. There’s just something about the printed comics I can’t give up.

Posted on October 9, 2013, in Featured. Bookmark the permalink. 2 Comments.