Marvel, you are drunk.

Thinking back on those days, I have no idea why I thought it would be a good idea to pick up New Avengers #1. As a spin-off from Civil War, New Avengers always sat on the periphery of the Marvel Universe. The new New Avengers series is impenetrably thick with Illuminati mythology. Let’s start at the beginning. 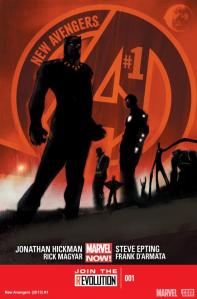 Why is Reed Richards such a sourpuss now? The issue opens with a monologue from Mr. Fantastic about the end of the universe. This is the guy who discovered a “Negative Zone”, and his first instinct was “we should totally go there!” Now he’s all gloomy Gus about some impending doom.

After the prologue, hey, we’re in Wakanda. Several young Wakandans are involved in a real-life Nintendo quest to become the next generation of leaders. Then, when the Black Panther is congratulating the group on their accomplishment, outer space bad guys show up.

I, literally, have no idea what is going on. None of the protagonists or antagonists have recognizable motives. The action is nonsensical. There’s a scene where it looks like one of the good guys runs into the battle and then turns his back on the bad guys for no reason other than it lets them shoot him in the back.

After that, all the Avengers get their butts handed to them in about a page and a half of action. The alien bad guys send Captain America back to Earth instead of killing him for no real reason.

This issue is a sloppy mess. “Return the leader of the team, beat up and bloody, to send a message about how badass we are” is lazy writing. So, of course Captain America assembles a team of “new” Avengers. Yet, although given ample opportunity, Cap never delivers the “Avengers Assemble” line. The dialog hopscotch that goes into avoiding that line is painful.

After a time away from comics, I thought that Avengers titles would be a good place to hop into the Marvel universe. Now? I feel like Marvel hates casual readers. And New Avengers #1 is flipping me off on virtually every page.

Also, why does the Black Panther have a costume that morphs? Is that really necessary? Is it supposed to be an alien symbiote? Because as a casual fan, that’s exactly what I think of when I see a black, skintight outfit the morphs and changes across a guy’s body.

Maybe there’s an “Avengers” title somewhere that’s fun and interesting for people who are not hardcore Marvel geeks. I would think that, based on the popularity of the movie, they’d at least try a title that’s a little accessible. So far, I haven’t found it though.

Sorry I didn’t go back and list the credits to the issue, like I have in the past. Any more time spent with this title is just going to irritate me.