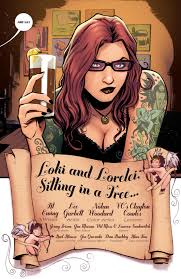 IDW’s Doctor Who comic book has been on my mind since I started this blog last year. As a casual comics fan who has been “out of the loop” for a while, and with far less free time and spending money than I used to have, I’ve been searching for titles that make sense for the way I read comics now – dipping in and out while following storylines online and through blogs. I actually spend more time reading ABOUT comics than I do actually reading comics.

So, the reason I’ve had my eye on Doctor Who is that it should be a title casual fans can enjoy. END_OF_DOCUMENT_TOKEN_TO_BE_REPLACED

When I got the (admittedly last minute) idea to write about the best Thanksgiving issue of any comic book in the history of time and space, there was no contest. That would be issue #4 of “Into the Void”.

But, since that hasn’t been written yet, here’s the VERY close second-place issue, Vision and the Scarlet Witch #6, “No Strings Attached” (per the splash page in the book).

Since it’s Thanksgiving, I’m going to give thanks for my ADHD and allow myself to tackle things a bit “stream of consciousness”. Or “wibbly-wobbly”, whichever you prefer. END_OF_DOCUMENT_TOKEN_TO_BE_REPLACED

So, you never know what you’ll find when you walk the floor at Comic Con. Earlier this month, I wrote an extensive post about what’s right about SDCC. One of the criticisms about the show is that comic books are “marginalized” at San Diego Comic Con. If that’s true, how did I ever find “Love and Capes”? END_OF_DOCUMENT_TOKEN_TO_BE_REPLACED