Wow! Already at 1,000 views. Thanks so much for following, everyone. I’m still powering through my SDCC notes and photos, so stay tuned. I’m also going to try and sneak in my review of New Avengers #1 and some of the other comics I picked up at SDCC.

An Introduction To Casual Comics Guy

Hi. I’m an average, casual comics fan. I like comics. I have sometimes loved comics. For spans of months at a time, comics were even my life.

Now? Now I’ve got a wife and three wonderful daughters. Translation: My time is at a premium. That’s why I’m a casual comics guy.

In high school, I walked to the local comic shop (Dragon’s Lair, Omaha, NE, 84th and Blondo) immediately after school every new comics day. Spent a lot of weekends at that shop, too. 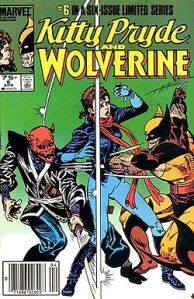 Why is her hair so short Al Milgrom? Why?

Cloak and Dagger? Still bagged and boarded in my basement as we speak.

I became an ultra-fan – a young dude who lived and breathed comics, spending hours in the local comic shop, discussing every title available. I even became “that guy” who used to try to make people read “Grimjack” and “Scout” because they were cool and “not for kids”.

Usagi Yojimbo? Got the original run.

Albedo? All over it.

“Watchmen”? Sure. It’s good, as the bloody smiley-face pin on my black trenchcoat will silently attest. But “V for Vendetta” was better.

Cerebus? (Sorry… I still don’t get that one. All my friends loved it though.)

Somewhere between being “that dude” and today, I lost “it”. It. That passion to know it all. To be able to one-up any comics fan with my encyclopedic knowledge of first appearances and Scott Summers’ twisted family tree.

Today? I’ve got the essentials down. I can explain the different between the 616 universe and the Ultimate Universe. Universe X, though? Forget it. I tried to read all the event comics for a while. I got through Civil War and Planet Hulk, including all the crossovers. When I spent a full afternoon tracking down a “Gamma Corps” crossover for “World War Hulk”, I finally threw my hands in the air. It was official. I couldn’t fight it any more. I was now Casual Comics guy – doomed to know – kind of – what’s going on in the world of comics at all times, but to be confused every time I step into a comics shop.

I still have a friend who has worked at that same Dragon’s Lair since high school. I still go to San Diego Comic Con… every other year.

In turn, that’s what you can expect to see in this blog. Questions that occur to me when I walk into a comic shop and stare blankly at the walls for an hour. I know that the guy working the counter wants to know why I gaze blankly for sixty minutes, shuffling back and forth between New Releases, Marvel, DC, Dark Horse, Image (I think), and whatever alternative press comics they’ve shelved. Now the cashier, store owner, and super-fan wearing a “Witchblade” shirt whose path through the store I am constantly blocking will all know what’s going on inside the mind of Casual Comics Guy.

‘Cause I can’t be the only one. (I’m talking to you, guy who only gets to go to a comic store when your wife lets you bring your kid to the Pokemon tournament held in back.)